Yes, we're moving. Actually, on Tuesday, May 26, WTF will go quiet and I will begin blogging in a new location with a new name: Wrath66.com.

With the new, more focused direction being taken here, I felt it was a good time to rethink the venue. So, I found a more robust platform (Squarespace, for the curious) that gave me the freedom to craft a more substantial space with a bit more character. I've moved the last three posts over to the new venue, but other than that, it will be a completely fresh start.

There are definitely some significant changes, but I'm hoping that you'll immediately find it welcoming and quickly find it familiar.

Whether you've been following by RSS or email, you'll need to resubscribe (and I sincerely hope you do) but you won't be getting duplicate emails as this is likely the last post here for the foreseeable future.

My deepest thanks for you attention, comments, and support of WTF. I hope you make the move to Wrath66

A couple of notes:

For those few who may be unaware: The title of this post is a line uttered by Billy Ray (Eddie Murphy) in the train scene. It's not in the trailer.

A Sorry State of Affairs 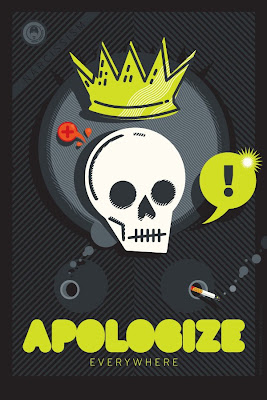 Apologize [from The Unreasonable Triptych] » 20"x30"

I'd managed to work out one set of demons with Doomed when immediately another crept in. In starting to work on a third piece, I realized I was already starting to think about this new creative endeavor like a marketer – something I decidedly do not want to. At least not yet.

Apologize, is admittedly the most contrived in that I'd begun to think of the "King" featured in the previous two pieces as a "brand". A nagging – and slightly annoying – vestige of my recently exited career. So to exorcise that demon (or at least to placate it), I decided to face it, to embrace it, and give the "King" his own piece (ultimately the centerpiece). As for expressing regrets, I'm not sure who deserves the apology. Or why exactly.

Having at least temporarily subdued the notion of creating to create "product", what I found was that there were creative tropes of marketing consumer goods that when mutated and obscured a bit (or possibly beyond recognition) were actually liberating. Embracing this notion early has serendipitously proven invaluable in developing an evolving vernacular that I've continued mix and remix in subsequent pieces.

Anyway, the first three pieces weren't really intended to be a triptych but retroactively organized as such. That the individual declarations formed a somehow disconcerting directive when combined confirmed the decision. 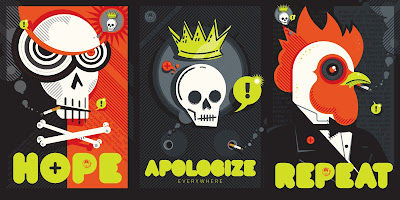 While, I'm pretty sure writing a blog means never (or is it "always"?) having to say you're sorry, here's a different apology: I realize that for some of my limited readership, the new direction of WTF may be a bit tedious. A bit too self-serving. Sorry.

I wasn't really doing much with WTF anyway and my Twitter feed is better suited to post the cool/funny/clever/arty videos I'd been posting here (Join Twitter people. I'll be more than happy to discuss how to get the most out of it – with very little effort on your part.)

So, for the foreseeable future, this is what's going to happen here. I'm going to post stuff I've been designing and talk about it. These first tentative efforts may seem a bit awkward – they certainly feel awkward – and not particularly "artful" but you're seeing a process – not a product. I'm hoping that over time I demonstrate progress and growth in both the visual and verbal efforts here. But, you'll have to wait and see. Or not. It’s a particularly daunting task setting out to create solely for the sake of creating – with no real purpose in mind. Particularly when if you allow yourself to be distracted by a lack of any obviously remunerative purpose. Purpose can be a significant deterrent to progress.

Having found the process (and result) of working on The Unreasonable Man so gratifying, I found myself briefly paralyzed by an irrational fear that I couldn’t do it again – that I wouldn’t find the tabula rasa from which to work again. The sensation of channeling something, rather than composing it was one I didn't realized I'd missed until I'd experienced it again. I very much want the work I do to be imbued with meaning I just don't want to be guilty of consciously producing something that might be viewed as precious or contrived – I don't want to be too sure of what I'm trying to say.

So, simply to keep working the “muscles” I was using I decided to use another artist’s work as inspiration. To "do an homage". So, I spent a morning looking for inspiration both online and off until ultimately finding it right in front of me (behind me, actually). I found my inspiration in a 7"x10" ink and marker "portrait" of stoic rooster incongruously dressed in a tuxedo and possessed of a gaze as cryptic and iconic for me as La Giaconda's smile. A 28 year-old piece by my Dad (an accomplished and prolific artist himself), Hol and I have a print of it framed and hanging in our kitchen. “Doomed” is a reinterpretation, a repurposing – if it was a movie it might fairly be considered a remake. So, while I tried to keep any real intent from creeping in as I worked, stealing quick glances over my shoulder to be sure I was doing the source material justice, I found myself thinking of the oft-misquoted George Santayana quote,

Those who cannot remember the past are condemned to repeat it. 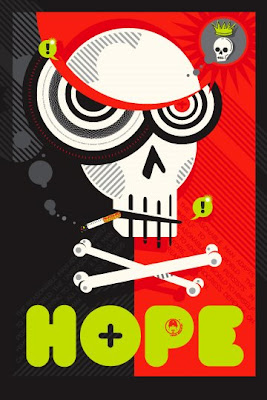 Though I'm ashamed to admit I know next to nothing about GBS, the above quote has been a favorite of mine for sometime. Some might say argue that I fancy myself the Unreasonable Man. Some might say I'm just unreasonable.

Regardless, the quote has recently inspired me to be at the very least a bit headstrong. Having recently lost a position doing something I've done reasonably well for over a decade, I found myself with no desire to pursue doing it any longer. Arguably an unreasonable attitude. Particularly when one considers that I haven't known with any certainty what I am going to do. The inspiration I found in the quote – and it is certainly a self-serving reading – is to embrace this lack of reason in the interest of progress. And on a very gratifying personal level it's paid off. Over the past month and a half I've found myself gradually pulled, almost imperceptibly at first, (back) towards a desire to produce art. Not necessarily to create Art with a capital "A" mind you (I wouldn't be that presumptuous), but simply to create solely for my own gratification and edification. And that's progress.

The piece above represents the initial expression of that desire. The first piece of "design for art's sake" I've produced in years, it is maybe rather obvious, maybe not. The first panel of the first of two triptychs I've completed so far, it was effectively produced out of a stream of consciousness sort of state with the whole never predetermined. So too much shouldn't be read on the surface. However, anyone looking at it – and familiar with Shepard Fairey's iconic and ubiquitous Barack Obama "Hope" poster – would be forgiven for reading it as an obscure homage or – in a less sympathetic reading – a clumsy rip-off. It's neither. And, as much as I like the man, Obama – contrary to popular belief – does not own "hope". However, if it is either, it is only through a surreptitious act of my sub-conscious. And, I'd hate to dismiss all the other influences that seem to have informed – some more sublty than others – the piece as a whole.

In the recent past, when I've been inspired to design with "art" as the intent (in the last twelve years, an act typically undertaken with keyboard and mouse), the work has generally gone unproduced – destined to spend it's life as a series of 1s and 0s on some harddrive or another. This time I've decided to change that and have vowed to myself to produce work – to bring the work to life in a tangible form.

So, with no expectations of what may ultimately come of it, I'm talking with a former co-worker, designer, print-maker extraordinaire, Billy Baumann of Delicious Design League to help me begin by producing the above as an edition of 20"x30" silk screened posters. Panels 2 and 3 of The Unreasonable Triptych – Apologize and Doomed, respectively – to be produced soon thereafter followed by The Substantial Triptych.

Here's to being unreasonable...
Posted by Unknown at 9:03 AM 5 comments:

Apologies to my Tweeps who may have already seen this from me.
Apologies to Mom for the source material for the headline.
Posted by Unknown at 12:00 PM No comments: 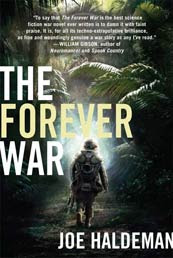 As a bit of a sci-fi head, I'm embarrassed to admit that I was completely unaware of Joe Haldeman's 1974 human/alien war masterpiece, The Forever War. It only came to my attention when Hol an I stopped in to a Border's (may have been a B&N, I can never tell them apart) and there was a big stack of them on one of the front tables. I had a faint recollection of reading about the upcoming Ridley Scott adaptation, but that was it. I picked it up thinking it was new only to realize it had 35 years of accolades heaped upon it.

With detached, spare language, Haldeman creates a cold, (largely) empty universe in which humans having finally come in contact with an alien species, the inscrutable Taurans, jump through space – and most compellingly time – in an effort to eradicate them.

If like me, you're a sci-fi fan that may have missed this one, do yourself a favor and pick it up. It's fantastic.
Posted by Unknown at 3:55 PM No comments:

Elegantly animated video for Moray Mclaren's "We Got Time" using multiple turntables and Zoetrope techniques.
Posted by Unknown at 3:19 PM No comments:

A repository for writings miscellaneous crap on subjects relevant (however loosely) to the point(s) where my professional and personal lives intersect. [On the name.]

New Posts Delivered to Your Inbox!